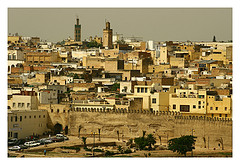 Meknes was the 5th city and one of the 4 imperial cities in Morocco. It is registered as a world heritage site by UNESCO.
Formerly a Sharifan capital, today it remains a popular city for Berber gatherings.
This city was the work of one man, Moulay Ismail. He wanted to depict his dream in stone in the form of palaces, gardens, terraces... emerging amongst kilometers of yellow-ochre fortifications, his immense gates and his green ceramic minarets.
Its charm resides within its decor: from a beautiful region with hundred-year-old trees, then trekking towards great Zerhoun Mountain.
It remains the core of the agricultural region, producing fruit and forests. Aside from that, this city has also become a very active and an important commercial and economic center. Don''t forget its abundance of various traditional activities and tourism.
This leg of the journey is worth embarking upon and will be chalked full of beautiful cultural escapades.

Within the imperial city 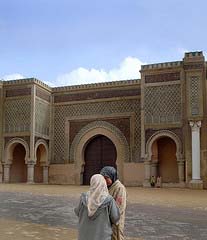 Héri-es-Souani: are granaries and impressionable monuments. See how this perspective yields such a surreal place.
Bab Mansour-el-Aleuj: are symbolic doors of all of the sultan''s power via their magnitude and their beauty.
The Mausoleum for Moulay Ismail: for its magnificence and beauty.

The Medina Markets
The Dar Jamai Museum: is without a doubt, the most beautiful museum harboring Moroccan traditions. Absorb the solitude of the Andalusian garden. 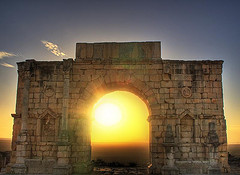 instruments (above all traditional instruments): the musicians will be...
Haras de Meknes: adapts the country-style in the heart of the city.

Moulay-Idriss: is the city of the highest Moroccan saint. It''s the pilgrimage place for Muslims with modest conditions: being equivalent to a journey to Mecca.
Volubilis: is the name of a flower offered to the most important Roman ruins in Morocco. A "Moroccan Ephesus." Two magical moments: the sun rising and setting... allow yourself to be seduced.
Imouzer-du-Kandar and Ifrane: is a refreshing haven. It''s the "Moroccan Switzerland." It doesn''t lose its calm and refreshing nature during the summers.
Beautiful stopping points on the way to Marrakesh: Kenifra, Beni Mellal, ... everything you need in order to relax along this long journey. 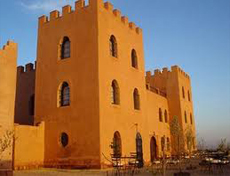 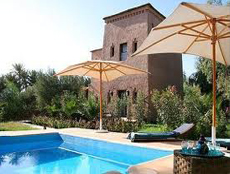